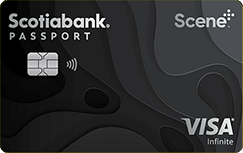 I’ll be honest. March 15, 2018 was a dark day for me. That’s when Chase officially ended its Marriott hotel and Amazon affiliate credit cards program, thus removing two of Canadian consumers’ best options for cards with no foreign transaction fees.

It came as a big blow because, as an inveterate globetrotter, a credit card with no FX surcharges is as essential to my travels as a reliable carry-on and a comfy neck pillow.

Luckily, just as I was contemplating curtailing my travel plans, one of the country’s big banks decided to shake up the Canadian travel credit card landscape with a new premium offering. Scotiabank’s recently launched Scotiabank Passport® Visa Infinite* Card not only features no FX charges, but it also comes with a nice sign-up bonus, a solid rewards rate and some attractive perks like free airport lounge visits.

Thanks to an aversion to reading the fine print, many Canadians travelling abroad don’t realize that most credit card companies hit them with an additional fee every time they pay for a purchase in a foreign currency. Known as a foreign transaction fee (aka FX or forex fee), credit card issuers tack on an extra 2.5 to 3% to all foreign purchases in order to convert your spending into Canadian dollars.

While it may not seem like much, for business travellers or passionate wayfarers like myself, forex fees can be a significant expense. Just imagine adding an additional 2.5% to every single hotel stay, meal, attraction and souvenir you charge on your credit card outside of Canada. Even if you take just one international vacation a year, FX fees can amount to hundreds of dollars, especially if you have a large family.

That’s why the arrival of the Scotiabank Passport® Visa Infinite* Card is such big news. Though using a credit card with no foreign transaction fees is one of the easiest ways to cut down on travel expenses, not many Canadian cards offer this perk. In fact, you can count the number of Canadian cards with no foreign transaction fees on one hand. The Scotiabank Passport® Visa Infinite* Card finally gives consumers another appealing travel reward card option (and—dare we hope–may even signify the start of more credit card competition in the no FX charge field).

New Cardholders can take advantage of an impressive introductory bonus:  Earn up to $1,320* in value in the first 12 months, including up to 40,000 bonus Scene+ points and first year annual fee waived.¹ Earn 30,000 bonus Scene+ points by making at least $1,000 in everyday eligible purchases in your first 3 months. Plus, as a cardholder, you are eligible to earn an annual 10,000 Scene+ point bonus when you spend at least $40,000 in everyday net eligible purchases annually. Offer ends April 30, 2023.

The straightforward redemption program is also appealing; 100 Scene+ are equal to $1 in travel purchases.

Aside from not paying foreign transaction fees and accruing rewards, cardholders also nab quite a few added benefits through the Visa Infinite Program, including one free supplementary card.

One of the most notable perks is the free Visa Airport Companion Program membership, which includes six airport lounge visits a year (most premium travel rewards cards offer four or less yearly visits). Normally, each lounge visit would cost $32 USD. On international flights with long layovers, a lounge can be a much-needed oasis, making this feature alone reason enough for some people to sign up for the card.

The card’s insurance offerings—including trip interruption, rental insurance and hotel burglary insurance—are on par with other premium travel credit cards. The travel emergency medical insurance stands out somewhat for offering 25 days of protection for those 65 and under and 3 days for people 65 and older, which puts it on the higher end of days covered. Also noteworthy is the baggage delay insurance. Insurance kicks in after only four hours; many comparable cards only offer insurance once your luggage is missing for at least 6 or 12 hours.

The Scotiabank Passport® Visa Infinite* Card is definitely an enticing and long-overdue addition to the country’s paltry selection of no foreign transaction fee credit cards. The $150 annual fee is slightly higher than the average $120 for most travel cards of this caliber, and there are also other credit cards on the market that have higher earning rates in similar reward categories (like Scotiabank’s own Scotia Momentum® Visa Infinite* card or the new American Express Cobalt® Card). The Passport Visa Infinite card, however, is still one of the few travel cards from a major bank with no foreign transaction fees, and its Priority Pass membership and insurance features are nothing to scoff at.

If you travel only in Canada, then you can likely earn more rewards with a different credit card. If you travel abroad at least several times a year, however, the money you’ll save with no foreign exchange surcharges could well make up for Passport’s annual fee over the course of just a couple of trips. The six airport lounge visits and solid insurance perks further enhance the aptly named card’s value and will indeed make it less costly for Canadians to grab their passport and go.

Apply Now
American Express is not responsible for maintaining or monitoring the accuracy of information on this website. For full details and current product information click the Apply now link. Conditions apply. ¹ Conditions Apply. Visit here for the Scotiabank Passport® Visa Infinite* Card to learn more.

Total Articles: 68
Sandra MacGregor has been writing about finance and travel for nearly a decade. Her work has appeared in a variety of publications like the New York Times, the UK Telegraph, the Washington Post, Forbes.com and the Toronto Star. She spends her free time travelling, and has lived around the globe, including in Paris, South Korea and Cape Town. You can follow her on Twitter at @MacgregorWrites.
Read more from this author