Adieu SPG! Bonjour Bonvoy! Well it’s official, the Amex SPG credit card is no more. After months of waiting (since the merger of SPG and Marriott loyalty programs in August, 2018), Marriott has finally rebranded its loyalty program and has launched the Marriott Bonvoy™ American Express® Card, displacing the SPG card.

But just how different is the Marriott Bonvoy™ American Express® Card from its predecessor? Not so different, as it turns out— at least for now. While the Marriott Bonvoy™ American Express® Card rebranding brought with it a new elegant card look (though I was personally a fan of SPG’s snazzy red rather than Bonvoy’s sedate slate), relatively little has changed with respect to the card features themselves. 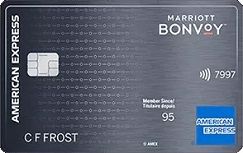 It’s also worth noting that, as announced in January, Marriott’s Platinum Premier Elite was replaced with Marriott Bonvoy Titanium Elite for members who stay at eligible properties for a combination of 75 nights. Furthermore, Platinum Premier Elite Ambassador level was replaced with Marriott Bonvoy Ambassador Elite once a member stays more than 100 nights and spends over $20,000 annually. This is the highest membership level.

The realigning of elite tiers has had positive benefits for members, according to Marriott, which claims that, “Members now earn on average 20 percent more points per dollar spent.”

Aside from the Bonvoy’s tres bon welcome bonus, the rest of the card’s offerings stayed more or less the same, including:

The Future for Bonvoy

Is the future bon for Bonvoy cardholders? At this point, there’s no news that more changes are in the works for the Marriott Bonvoy™ American Express® Card. But after the last couple of years of ups and downs for Canadian Marriott fans, we can at least enjoy a period of relative calm. That said, we wouldn’t object to beefing up the Marriott Bonvoy™ American Express® Card with maybe one more key travel feature, like the exemption from foreign transaction fees offered by Canada’s now-deceased Marriott card, the Chase Marriott Rewards Premier Visa.

*American Express is not responsible for maintaining or monitoring the accuracy of information on this website. For full details and current product information click the Apply now link.
* This post was sponsored by Amex Bank of Canada. The views and opinions expressed in this blog, however, are purely our own.

After years of using spg with many years spending in the 7 figures Im looking for a new card to collect points on. Already added 2 other cards reducing the spending on the bonvoy card. Marriott reduced the point value by 1/3 or more in cases. I can live with that… but combined with the lower level of service its time to leave.

Maybe it’s time to consider an Amex Platinum card? If you were a fan of the Marriott Amex card, then you’ll be with a familiar credit card network and can take advantage of the Platinum level perks that come with it. We’re specifically talking about the high rate of Rewards from travel, dining, and other purchases and the complimentary access into over 1,200 worldwide airport lounges. This card and a good Visa or Mastercard to cover “everyday” purchases like groceries, and transactions with merchants that don’t accept Amex, will be a powerful pair.

My husband is the primary card owner on the SPG card and I have a card in that account.
Curious if I applied for the Marriott Bonvoy in my name if I’d get the bonus sign up points?

Good question. Essentially, the bonus points offered by Marriott Bonvoy for signing up are only for new primary cardholders, and it sounds to us like you’re a secondary cardholder on your husband’s old Starwood Preferred Guest account. That may mean you have access to his current Bonvoy account since he probably didn’t change his membership number, and so if you signed up for a Bonvoy card using his account then it wouldn’t come with extra points. However, you could absolutely apply for a primary Bonvoy card yourself and then add the bonus points you earn to your shared membership account.

This would of course require that you get approved for a new credit limit, because banks (and by association, their rewards programs) don’t give away points unless they’re getting something in return (your potential credit balance). Hope that clears it up a bit! If you’d like to mull over the pros and cons of getting another Bonvoy card then email us at [email protected].

I had the AMEX SPG card back in the Spring and I cancelled it after having it for a couple of year. I got points when I signed up for it… Can I now sign up for the Bonvoy AMEX and get the bonus points?

Great question. You wouldn’t know it from reading the Amex or Bonvoy websites, but being a past cardholder of either this card or the old Starwood Preferred Guest card (this card’s past alter-ego) is the only disqualifying variable in your ability to get the 50,000-point bonus. It’s clear if you read the footnotes, where it says “For current or former Marriott Bonvoy American Express Cardmembers or Starwood Preferred Guest Credit Card from American Express Cardmembers, we may approve your application, but you will not be eligible for the welcome bonus.” In our opinion the card is well worth it without a bonus, but if you feel otherwise, let us know what your preferences are and we can pick out the card that fits them best!

I’ve noticed that the welcome bonus points were originally 60,000 but now it’s saying 50,000, when did this change?

Appreciate the comment and question about Marriott’s alteration to their Bonvoy card. As of May 28, 2019, the introductory bonus awarding 60,000 Bonvoy points has gone down to 50,000 points. This promotion had the intention to onboard cardholders onto this brand-new card at the time with a more lucrative bonus than normal, but 50,000 is still very valuable. At the same time, Marriott added 300 more hotels to the Bonvoy network, meaning that you’ll be able to use the card and redeem points at 7,000 hotels globally. Let us know if we can help with anything more regarding this great travel card, and we’ll be happy to oblige to the best of our knowledge. Thanks again.

Points needed to book a room tripled, but my points earn is only double (2 per $). Also no additional perks. 1/3 reduction in points after Marriott assured they would maintain the integrity of the Starwood program. Very disappointed. Looking at other cards.

We’re sorry you’re unhappy with the value that you’re getting from your new Marriott Bonvoy card, and if the new reworked points system isn’t working for you then it’s fair to look elsewhere. We’ll be happy to provide suggestion and have done so below! However, the card does have perks that we want to make sure you haven’t missed. For example, did you know you already received a bigger sign-up bonus than the old Starwood card had? You’ll also earn your way into new Elite tiers faster—Marriott estimates that it’s now requires 20% less spending to get into a new tier than it used to. Plus, you still get those 15 Elite night credits, fast earnings, and flexible redemption of points.

We think that if the migration to Bonvoy wasn’t beneficial for you, then you should switch to a card with a high flat-rate on all spending. You won’t need to discriminate where you spend or what you redeem points for (cash back if you want even broader redemption power!), and the best two cards for this currently are BMO’s World Elite Mastercard and Rogers’ World Elite Mastercard. The former has one of the fastest models for earning flexible BMO points, and comes with awesome travel perks like access to the VIP airport lounge. The latter offers 1.75% cash back on all spend in Canada, 4.00% on transactions in a foreign currency, and a $0 annual fee.

Both are excellent, purposeful travel cards and will impart you with some nice benefits more appreciable than hotel status or free nights, which aren’t relevant if you don’t stay at Marriott, the Ritz-Carlton, or SPG locations multiple times a year.

I agree with Dave. I travel a lot and notice far less room availbilty at decent point rates and often rooms are not availble on points at all. We used to be able to treat ourselves to 5 star luxury and get upgrades especially in Europe but that has ended. I just stayed at a Hotel where they wanted 25000 points plus 238 euros and you could book it direct for only 209 euros.. same room. They also would not let me book for members of my family and longer. My points My face they said. I miss my spg

Hi Stephen,
Appreciate you sharing your experience. It’s unfortunate that there’s been a decline- that hotel redemption seems rather…ridiculous. I’d speculate that the travel industry is trying to recoup whatever they can given current circumstances. Let’s hope that the situation turns around soon.

I just returned from the US and it appears that the Bonvoy card has not charged me any foreign transaction fees. The old Chase card had that perk but it wasn’t advertised for the new Amex card (that I can find, anyway). It is, however, advertised in the American version of the Amex Bonvoy. So is it a perk in Canada or am I missing something on my bill?

Thanks for your comment and for reading GreedyRates. The Canadian version of Marriott’s Bonvoy card does charge standard foreign transaction fees, so perhaps they’ll be applied to your statement later or there was a miscalculation somewhere. Either way, we wouldn’t expect the card to escape these fees under any circumstance, as it’s not advertised and indeed, Marriott offers another credit card that exempts cardholders from foreign transaction fees explicitly. We’d look at your bill again, and if you can’t find any indication that the listed purchase price was different from what you were charged (compare your receipts and don’t forget the exchange rate is always changing a bit), we’d investigate by calling Amex. Good luck!

Just a short note to say that if you did own the SPG card previously, you may not get the welcome bonus of 60000 bonus points. The fine print says that the bonus awarded are once in a life time .

Thanks for the great comment. We’re sorry if we didn’t make this more clear in our articles and reviews of the Marriott Bonvoy card, but you’re correct. Those applicants who have had the Marriott Bonvoy card or the old Starwood Preferred Guest card might be accepted but they won’t be eligible to receive the 60,000 bonus Marriott Bonvoy points. While it’s a disappointment not to gain this bonus, which is worth around 4 free nights, you’ll still receive a ton of value from the Bonvoy card. The annual free night award is great, as is the automatic upgrade to Silver Elite status at many hotels, the 15 Elite Night credits, fast earnings and great insurance.