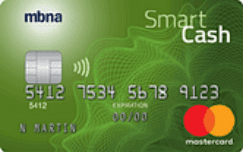 MBNA provides its Smart Cash Platinum Plus® Mastercard® to those who want to earn cash back on gas and groceries, but are not willing to pay an annual fee. The bank is also offering a lucrative accelerated cashback promotion, which helps to boost the rate of cashback accrual during the initial months with the card. When compared with other no-annual-fee cashback cards, it’s competitive and definitely has its niche, but may not be the best for cardholders who don’t spend a lot on gas and groceries.

The multi-tiered cashback structure of the MBNA Smart Cash Platinum Plus® Mastercard® is a bit convoluted and has some conditions that everyone should be aware of. New cardholders will appreciate a welcome bonus of 5.00% cash back on gas and groceries during their first 6 months, but this accelerated earn rate is restricted. Cardholders are only able to earn 5.00% on their first $500 spent monthly between gas and groceries, applied each month until the promotion ends. It’s a pretty easy milestone to hit, and if cardholders do hit it every month during their first 6 months they’ll get at least $150 total cash back at the accelerated rate ($500 spending at 5.00% = $25 x 6 months = $150 cash back).

After spending $500 on gas and groceries during a promotion month your earning rate is reduced to the card’s base 0.5% cashback rate until the next month. Once the 6-month promotion period ends, 2.00% cash back will be earned on gas and groceries, but again with a $500 spending cap in those categories each month. After reaching that spending cap the gas/grocery earn rate is reduced to 0.5% until the next month starts, which is also the flat rate that you’ll earn on all purchases outside the gas and grocery categories, at any time of year.

Those who charge a lot of purchases to their card each month should consider other no-annual-fee cashback cards that offer higher flat cashback earn rates, without monthly spending limits. This way they can earn more outside of the gas and grocery categories and on monthly gas and grocery purchases in excess of $500 as well.

The Rogers Platinum Mastercard might be a good alternative, as it provides 1.25% cash back on all purchases, without spending limits. The Tangerine Money-Back credit card is another alternative to consider, as it earns 2.00% cash back in 2 categories of your choice (you can pick both gas and groceries), but without a limit that downgrades your cashback rate after spending a certain amount. But neither the Rogers Platinum Mastercard nor the Tangerine card have an introductory bonus like the MBNA Smart Cash Platinum Plus® Mastercard® does, so many will still prefer MBNA in the end.

Who’s the Card For?

The Smart Cash Platinum Plus® Mastercard® is for cardholders who don’t want to pay an annual fee, don’t want to deal with lofty eligibility requirements, and who don’t often spend much more than a few hundred dollars between gas and groceries per month. It’s one of the most competitive among no-annual-fee cashback cards, though if you’re prone to high monthly spending on gas and groceries you might consider shopping around for other options.

Total Articles: 149
GreedyRates is Canada’s go-to resource for all things personal finance. Our expert articles and videos cover every topic under the financial sun, including credit cards, credit scores, loans, bank accounts, budgeting, investing, RSPs, TFSAs, GICs, taxes, and more. Want our advice on a personal finance issue? Send us an email at info@greedyrates.ca and we’ll gladly give you some free tips.
Read more from this author

More On Cash Back